For quite some time now, I’ve been wanting to review the wonderful Eighth Doctor graphic novels / comic book adventures available from Panini Books and originally published in Doctor Who Magazine (DWM) during what we might call the “second great hiatus” i.e. during the continuity void between the 1996 TV movie starring Paul McGann as the Eighth Doctor and the relaunch of the TV show with Christopher Eccleston as the Ninth Doctor in 2005.

Panini has published many very good comic book material from the pages of DWM featuring other incarnations of the Doctor - but the ones with the Eighth Doctor are really a cut above the rest, probably because the writers were no longer hindered by the continuity of the then-defunct TV show and could thereby let their imagination and creativity run wild. The Eighth Doctor, with his dashing, adventurous yet compassionate personality, also works particularly well as a comic book hero, especially in the more epic storylines. Some of these stories are absolute must-reads for any DW enthusiast – and even more for DWAITAS gamemasters looking for all sorts of wild, weird and beautiful ideas for characters, plots, aliens, threats and even whole campaign arcs.

These stories are collected in four, large-format (slightly bigger than A4) 200+ page volumes named Endgame, The Glorious Dead, Oblivion and The Flood. Each volume contains several different (but often interconnected) stories, most of which are in four or six parts, with the occasional one-shot between two epic, multi-part adventures. The title of each volume comes from one of the multi-part stories. I intend to review each book in a separate post, time permitting and all that.

Since this is an RPG-oriented blog, my reviews will focus more on the stories themselves but it should be noted that the overall quality of the art is very good, with several exceptional passages, and does a very good job of conveying the spirit and atmosphere of the DW universe. The only slightly disappointing bit is that the first two volumes are in black and white, because the stories were originally published that way - don’t get me wrong: I’ve got nothing against B&W art per se but the DW universe, with all its fantastic locations, weird beings and spectacular happenings, really does seem to cry for a full colour treatment. Such is the case in the two other volumes, in which colour is often used to great effect.

So, without further ado, on to the stories themselves – with quite a few SPOILERS (I’ll try to keep these to a minimum but, hey, they’re probably as inevitable as temporal paradoxes). 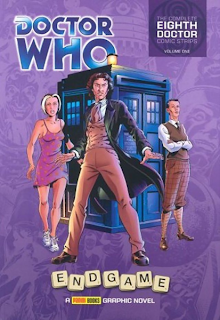 The first volume, ENDGAME, contains a total of eight stories, including six multi-part ones:

It opens with the eponymous story, Endgame, a 4-part, 29-page adventure which starts in the fictional English small town of Stockbridge and soon moves to another dimension, where the Doctor fights one of his old adversaries, the Celestial Toymaker. It includes quite a lot of surreal, psychedelic effects – including a slightly predictable duel between the Doctor and his own dark half. The most interesting feature in this story is that it introduces the Doctor’s new companion, a young woman named Izzy (short for Isabelle), who starts as a geeky sci-fi fan / UFO spotter but will gradually develop into a truly unique and memorable character over the next stories and volumes.

Then comes The Keep, a 2-part, 14-page adventure which sets the stage for Fire & Brimstone (see below) but also contains some intriguing concepts (such as an artificial living sun) – as well as interesting references to the nightmarish 51st century of Magnus Greel, the unforgettable villain from Talons of Weng Chian’g.

The third story, Fire & Brimstone, is a 5-part, 37-page epic adventure focusing on the battle between the Doctor and the mysterious time-active faction known as the Threshold, which he has already encountered in a past story (and incarnation), as summarized in a very informative recap article included in the book. The Threshold would make a very interesting antagonist for a series of RPG scenarios – and as a big organization waging war on the Doctor, it is really more imaginative and challenging than the military-styled Church featured in the last season of the TV show.

The fourth story, Tooth & Claw, includes neither Queen Victoria nor werewolves but is set on the private island of a dangerous eccentric with a dark secret. The Doctor and Izzy join a very select gathering of strange and shady characters on a private island, sometime in the 1930s, for a very special auction. From this almost Cluedo-like start, the story quickly evolves into something quite unexpected. That being said, the most interesting feature here is not the plot but a fascinating character: Fey Truscott-Sade, a female (but quite androgynous looking) “art detective” – imagine Raffles’ dandy lesbian sister dressing like Tintin and talking like Oscar Wilde and you won’t be far off. Fey then joins the Doctor and Izzy for their next adventures – and like Izzy herself, she will evolve in a very interesting and unpredictable way, turning into… well, something completely different.

Overall, Izzy and Fey are wonderful examples of how a typical DWAITAS player-character created from a fairly basic or classic template (“slightly lost geeky sci-fi fan from the 1990s” or “androgynous female dilettante from the 1930s”) can evolve or transform (spoilers!) into a truly unique character only after a few adventures in time and space.

The fifth story, The Final Chapter (which is NOT, despite what its title might imply, the last story in the volume) is a 4-part, 28-page story which takes the Doctor, Izzy and Fey to Gallifrey – where they are soon caught up into the usual games of intrigue between rival factions of Time Lord society. While the plot itself is not unforgettable, this story marks a very important threshold in the development of Fey (and, to a lesser extent, Izzy) as complex, unique characters. In RPG terms, this story is the perfect example of what you might call a campaign turning point, resolving some pending story threads while introducing new themes and directions.

The sixth and final story, Wormwood, is a 6-part, 45-page climactic confrontation between the Doctor and the Threshold - and this time, the fight will be to the death. This story does a splendid job of wrapping it all up together, with the appropriate mix of revelations and resolution (and probably a bit of retcon, too). It also includes an “alternative” Ninth Doctor – and a very interesting twist on regeneration. No, I won’t say more because this would really spoil your read. And the icing on the cake is that this “variant” Ninth Doctor does NOT cause any continuity or self-consistency problem with the future appearance of the official Ninth Doctor as played by Christopher Eccleston. There is a very interesting stunt here – and one that would be quite challenging (but not completely impossible) to emulate in RPG terms. If you want to know more, just read the book!

Next review will cover the second volume, THE GLORIOUS DEAD.

Posted by Olivier Legrand at 8:42 AM No comments: